This document describes BBEdit's support for the Language Server Protocol, introduced in version 14.0.

BBEdit 14.0 and later feature built-in support for the Language Server Protocol, (occasionally referred to here as "LSP", not to be confused with Lightspeed Pascal).

The protocol defines a communication standard by which outboard programs ("servers") can respond to requests from an editor ("client") with appropriate responses based on the content and location of files written in the language(s) that the server supports.

(Despite the term "server", nothing is transmitted over a network, nor does any data otherwise leave your computer by means of LSP support.)

By using LSP when a suitable server is available on your computer, BBEdit can provide improved text completion suggestions, provide enhanced navigation both within and between files, and enhance or enable other features and behaviors.

All of BBEdit's core features work just fine without a language server, so if you never install a server, BBEdit will behave just as it always has.

However, when you install a suitable language server, a number of advanced features and enhancements become available.

In order for a language server to be usable by BBEdit, it must be installed and (in some cases) configured according to the server developer's instructions. Most of the time, a server may be installed using Homebrew (or other package manager) or npm, but may also be built from source.

BBEdit will look for language server executables in the following locations, in order:

When a server has been installed via package manager or built from source, it is usually installed somewhere in your $PATH, and so BBEdit will locate it automatically without any further configuration.

In some cases you may find it desirable to override a $PATH or BBEdit package install. If so, putting the server executable or (preferably) a symlink to it in the "Language Servers" support folder will accomplish this.

For C-family languages and Swift, we recommend that you symlink a Homebrew or source-built clangd and/or sourcekit-lsp, so as to avoid using the versions included with Xcode. More about this is in the "Preconfigured Language Servers" section, below.

Language servers can be supplied in BBEdit packages, which might be useful for cases where the server is not a convenient standalone installation.

The server's primary executable should be located in the "Language Servers" directory within the package contents, and BBEdit will find it there when the command is configured solely by name in the language's LSP configuration. Please read the "Packages" section of the user manual to learn more about the construction and organization of packages.

On the versions of macOS that BBEdit supports, pip requires a version of Python that is newer than the version shipped with the OS. For that reason, use Homebrew or MacPorts to install the current Python release; you should then be able to use pip install to install your language server.

To install Node and npm, go to https://nodejs.org/en/download/, download and run the macOS installer. Thereafter you can use "npm install -g" to install any language server that requires you to do so.

Alternatively, if you are using Homebrew, use "brew install node" to install the Node framework, which includes npm; or install node/npm using whatever package manager you have.

Once the server itself is installed and configured, you may need to configure BBEdit to use the server. (This is necessary only if BBEdit is not preconfigured to use that particular server, or if you wish to use a server other than the one that is factory-configured.)

To configure BBEdit to use a server for a particular language, go to the Languages preferences and add (or edit) a custom language settings entry for the desired language.

The custom language preferences panel has a "Server" tab; this contains the configuration settings for that language's LSP support. 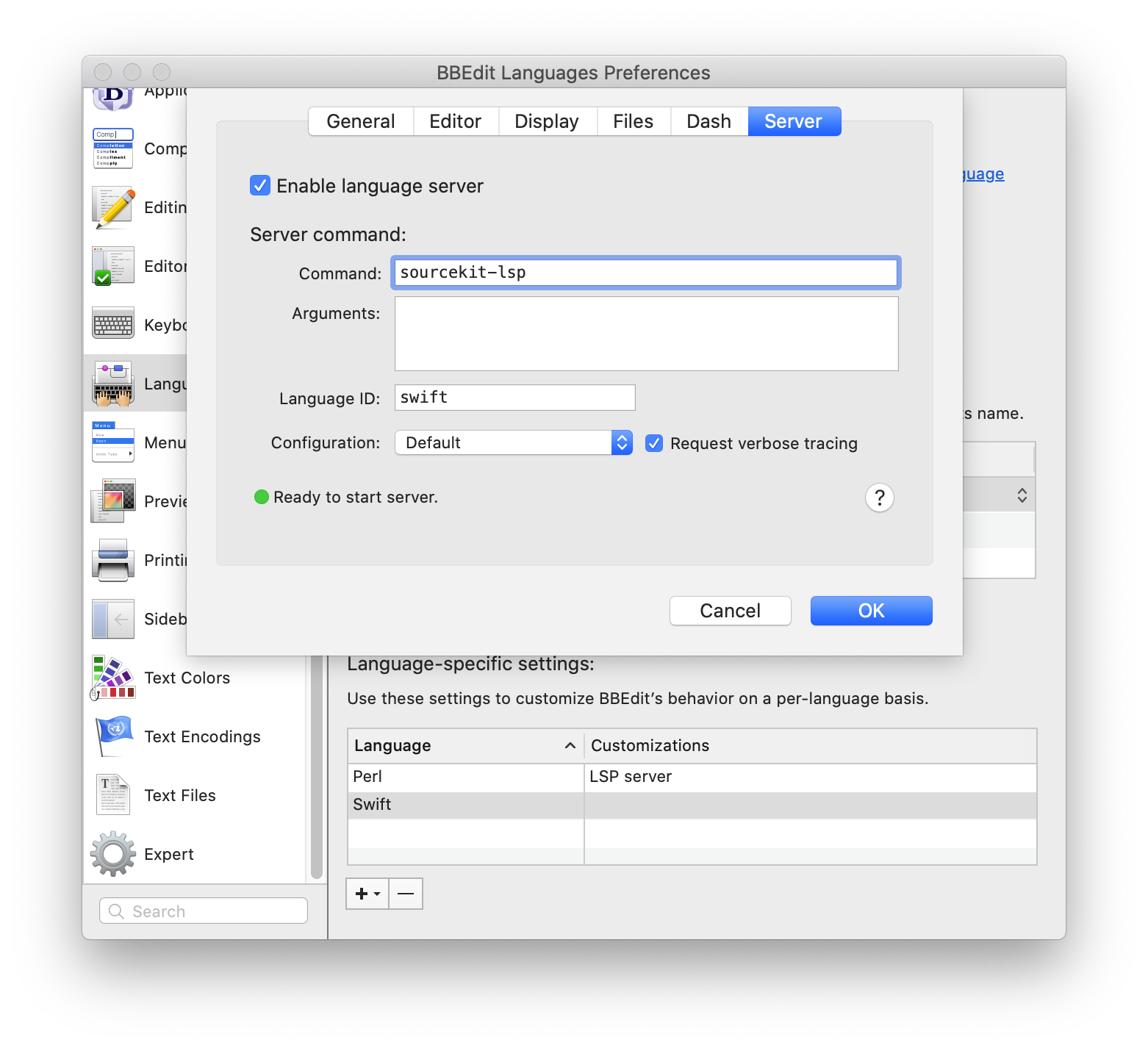 The "Command" setting should be the literal Unix executable or script that runs the server. Most of the time this is simply the name of the server executable, e.g. "clangd" or "html-languageserver".

The command you enter must be visible to BBEdit. See the "Language Server Placement" section for details.

Server arguments should be separated by spaces.

The "Language ID" may be left blank and BBEdit will generate one; however, if your server requires a specific language ID (some do) and it isn't the same as the automatically generated placeholder, you should enter it here. If you don't know, check the Language Server Protocol specification (search for "language ID") and see if there is a suitable ID available.

There are many servers available. Some of BBEdit's built-in language modules are preconfigured to use these servers, but in general is up to you to find, install, and configure your desired language server.

(The exception: BBEdit uses clangd for the C-family languages and sourcekit-lsp for Swift. These are bundled with Xcode, but please see the notes in the "Preconfigured Language Servers" section for important information.)

In many cases BBEdit has preconfigured support for one or more of these, and so all you need to do is install the server according to its specific instructions, and BBEdit will use it automatically.

BBEdit does not come with any servers bundled, and we cannot make any recommendations, nor can we guarantee that any server is fit for purpose, even if we have provided preconfigured support for it.

You can find servers for many different languages in the LSP implementors list as well as on the langserver.org community site.

If you come up with a recipe for installing and configuring a language server, and it works, we will buy you a donut. (Offer valid only in the US, but if you're not in the US we'll figure something out. Void where prohibited,)

BBEdit has preconfigured support for the following language servers. Please note that in all cases this is intended solely as a convenience. We make no representations as to the fitness or suitability of any of these language servers for any purpose, nor are we responsible for their behavior.

In all cases, BBEdit will use a correctly installed and configured server the next time you open a file written in the language configured to use that server; it is not necessary to quit and relaunch the application.

To customize a language server's initialization and workspace options, place a valid and well-formed JSON file in BBEdit's Language Servers/Configuration/ directory, creating both directories as necessary. Then, in the Languages preferences, choose the JSON file from the "Configuration:" popup menu in the Server tab of the custom settings sheet. Select "Default" to use the language module's default server initialization options, if applicable.

Warning: customizing server initialization or workspace configurations can cause the language server to crash or otherwise behave unexpectedly. We cannot provide assistance or documentation for customizing any language server, nor can we assist when things go wrong other than by recommending that you remove the custom configuration.

The JSON file's structure is as follows:

Warning: This also means that you can override BBEdit's factory defaults, by specifying initialization options that overlap with the ones supplied from the factory. We don't recommend that you do this ("high voltage within; refer servicing to qualified personnel") but if you must, you can.

The language server, at its sole discretion, may send a request to BBEdit requesting "workspace configuration" options. These are server-specific settings that apply only within the directory that the server believes contains the project in which you are working.

The request from the server includes the file path to the workspace, and the "section", or group of settings, for which the server requests customized settings.

An example of this can be found in the gopls language server; when you open a Go file at (for example) ~/Desktop/LSP Test/main.go, the server will request settings in the gopls section:

This is an opportunity to customize the behavior of gopls for all documents in ~/Desktop/LSP Test/.

To do this, your JSON configuration file should contain a workspaceConfigurations dictionary, which lists all of the workspaces for which you wish to customize the server's behaviors. Each workspace dictionary is specified by its human-readable path:

So in this example, we've specified usePlaceholders and completeUnimported for gopls, for all documents residing within the LSP Test folder in our home Desktop.

(Note: You can use a fully qualified path name as well, e.g. "/Users/siegel/Desktop/LSP Test", but for directories in your home directory, eliding with "~" is fine. The final "/" directory separator is allowed, but optional.)

In addition to directory-specific configurations, you can specify configurations that apply to all workspace directories. Do this by specifying a dictionary whose name is "*" rather than a directory path.

So, if you'd like to enable placeholders for gopls completions in all workspaces, but completeUnimported only for a specific workspace, your JSON would look like this:

Note that each workspace configuration can exist only once in the JSON, so each configuration must contain sections for all of the sections that may be requested by language servers. So, hypothetically:

Note: A language server is not obligated to ask BBEdit for a workspace configuration, so it's possible that providing a custom configuration will not affect the server's behavior.

In addition to global configuration, BBEdit also supports the placement of a JSON file in your workspace's folder, which contains a dictionary for each section. This is generally desirable when you'd like to maintain version control for your workspace configuration, and/or share it with others who are working on the same source code.

For in-folder configuration, create a JSON file named ".BBEditLSPWorkspaceConfig.json" in the workspace directory. (The file's name begins with a period to hide it from the finder and other UI mechanics; but you can use the bbedit command-line tool to edit it in BBEdit.) The JSON file should be a dictionary, which contains an entry for each "section" that may be requested by the language server. Thus, the in-workspace configuration file resembles the global configuration, but does not contain the top two levels of containment.

Using the above example as a reference, to configure workspace-specific options for gopls and other hypothetical language server sections in the same workspace, create a JSON file at "~/Desktop/LSP Test/.BBEditLSPWorkspaceConfig.json", which contains the following:

BBEdit will read .BBEditLSPWorkspaceConfig.json from disk each time the server requests a workspace configuration for that directory (which, again, happens solely at the server's discretion, if at all).

BBEdit allows C-style line and block comments in JSON workspace configuration files, so that they can be self-documenting as needed (especially when shared in a source code repository).

Thus, the examples above can be used as-is, even though they are not strictly valid JSON. BBEdit's syntax coloring, and the JSON language server, adhere to the strict definition of JSON in which comments are not allowed. This is intentional.

If you are developing a language module, you can include a ServerInitParams key in your BBLMLanguageServerInfo dictionary. For a compiled language module, this key's value may be either a string, which is used as the name of a configuration file in the language module's bundle Resources directory, or it may be a fully expressed dictionary, whose contents are placed in the initializationOptions dictionary that is sent to the server at startup.

For example, in BBEdit's built-in HTML language module, BBLMLanguageServerInfo looks like this:

HTMLLSPInitParams.json is stored in the language module's Resources directory. (You can look, but don't change it or else you'll break BBEdit's code signature and cause all kinds of problems.)

Alternatively, the custom initialization options can be written like this:

Note that, in either case, custom initialization options can be supplemented or overridden by a user-specified configuration file in the Language Servers/Configuration directory.